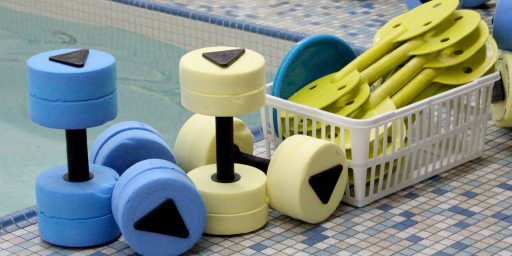 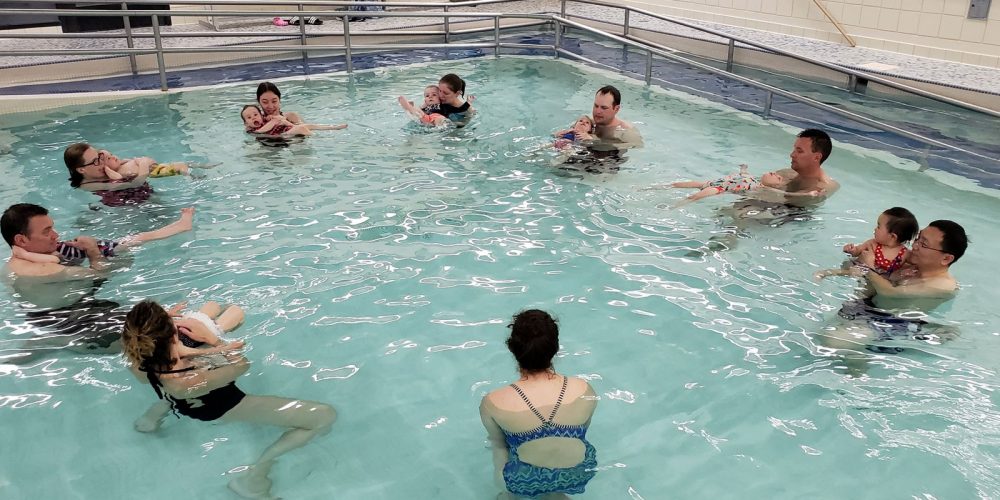 The SPLASH swim program was developed to give the community of Stevens Point an opportunity to participate in aquatic classes. All ages are welcome and there is a class for everyone. Kids learn to love and be safe in the water with parents and instructors. Adults can participate in joint, strength, balance and flexibility focuses classes to gain physical and social benefits.
Register Now 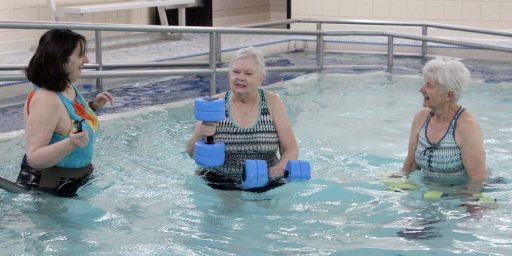 Adults with arthritis and older adults looking for a low-impact workout may take aquatic classes in summer. Classes are 45 minutes long and sessions are offered Mondays and Thursdays. All adult classes are $70 for one session.
Register Now Photos 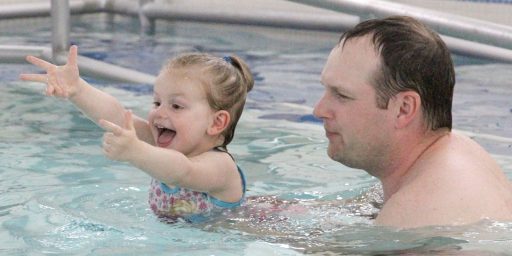 The classes are for young children of all abilities accompanied by a parent or guardian. Children gain an initial positive water experience, learn safety skills in and around water and just have fun. Classes are 30 minutes long and sessions are held Mondays, Thursdays and Fridays.
Register Now 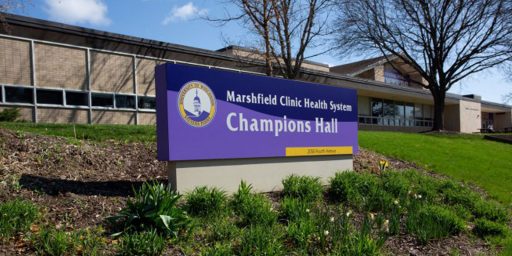 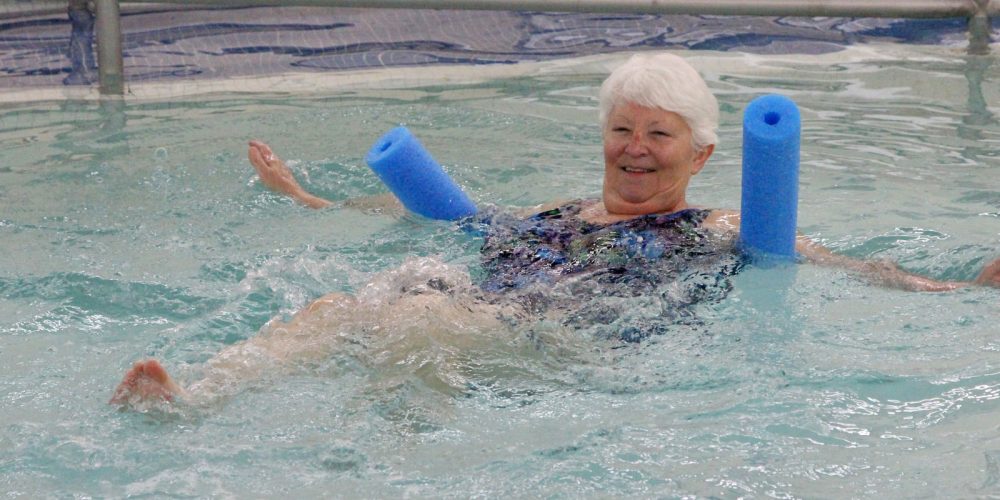 “It’s the one thing I found that addresses my arthritis like nothing else. It’s a real gift.”
Jennifer Burton 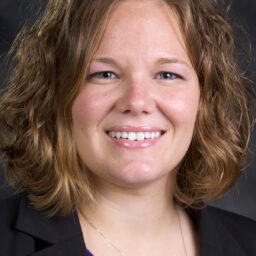 The Special Needs Aquatic Program (SNAP) was developed by Rory Suomi, Ph.D., in the fall of 1992. One of the missions given to Suomi as a new faculty in adapted physical education was to develop programs in the newly built therapeutic pool. Since usage of the therapeutic pool has limitations due to its shallow depth Suomi decided to focus programs on two populations; adults with disabilities for aquatic exercise sessions and children of early childhood age for swim instruction. SNAP was renamed Stevens Point Lifelong Aquatics Supporting Health (SPLASH) in 2019.

The Special Needs Aquatic Program (SNAP) was developed by Rory Suomi, Ph.D., in the fall of 1992. One of the missions given to Suomi as a new faculty in adapted physical education was to develop programs in the newly built therapeutic pool. Since usage of the therapeutic pool has limitations due to its shallow depth Suomi decided to focus programs on two populations; adults with disabilities for aquatic exercise sessions and children of early childhood age for swim instruction.

The choice of these two populations for programming were believed to be important for adapted and regular physical education students because laws such as PL 99-457 have mandated that children between the ages of 3-5 years old with developmental delays will be taught in public schools, and that the focus of PL 101-476 was to develop recreational skills in students that they will use after they leave the public school system. Since no instruction for these age ranges were offered in the physical education curriculum at UWSP, these programs were believed to enhance the educational offerings provided to our physical education students.

The focus of these programs was to enhance the teaching ability of our physical education students. Instead of developing curriculums for each program, two popular programs were chosen to be implemented. For the adults the Arthritis Foundation Aquatic Program was selected and for the children’s program the infant/toddler, preschool with parent, and Levels 1 and 2 of the American Red Cross Program were selected. Since both programs are commonly used throughout the United States it was believed focusing on how well our students implemented these programs would be of greater value

In November 1992, Suomi and Jerry Gotham, Ph.D., presented the SNAP program to the Stevens Point YMCA to be conducted as a satellite operation. The director of the YMCA and the aquatic director of the YMCA were in attendance. After listening to our presentation they decided not to become involved in our operation citing mainly financial issues as their main concern. In addition similar presentations were given to Community Industries and the Lincoln Center as promotional ventures to help obtain potential clients.

In February 1993 the adult portion of the SNAP was implemented. Two classes conducted three times per week were implemented in the spring semester. One instructor was utilized and 17 clients were enrolled in these classes.

In May 1993, Suomi and John Munson, Ph.D., met with the director of the local American Red Cross to discuss potential competition issues concerning our children’s program. At this meeting it was understood that we would conduct limited infant/toddler, preschool with parent and Level 1 classes to help our students learn to teach children of early childhood age.

Also in the spring/summer of 1993 a complaint filed to the Office of Civil Rights (OCR) against UWSP was issued by Suomi and several members of the SNAP on the basis that they were denied accessibility to the therapeutic pool due to the restrictive nature of the parking situation. This complaint was later settled when the OCR investigating committee decided that UWSP could indeed produce adequate parking closer to the pool complex.

In the summer of 1993 the children’s program of SNAP was implemented. Classes conducted were the infant/toddler, preschool with parent and Level 1.

UWSP physical education students started to use the children’s and adult classes as practicum sites for PEX 300, PEX 315 and PEX 360 classes in the fall of 1994. In addition, students from PE 220 and PEX 319 classes have used SNAP classes for observation sites pertaining to class objectives. In the fall of 1994, 17 physical education students were used as assistant instructors for 12 weeks.

In the second session of the 1994 fall program Level 2 classes were added to the children’s program. Two reasons for adding this level were: 1) due to the shallowness of the therapeutic pool we found that children could pass level 1 and not really be ready for level 2 – which they would have to take in a regular size pool. 2) Since there is an age requirement of 5 years for level 2 we had several four year olds who were passing level one and had no place to go for further lessons.

Munson and Suomi attended a meeting with the YMCA regarding competition issues between our programs and theirs in the spring of 1995. UWSP administration ruled that our program was being conducted on strictly an educational basis for our students and therefore the issue of competition had no relevance.

In the spring of 1995 we developed our first main student instructor for the children’s program. Susan Lindauer was in charge of organizing our children’s programs for this semester. Lindauer later obtained her master’s degree from Indiana University and is currently employed full-time teaching adapted physical education in the public school system. During the 1995 spring semester, 14 physical education students worked as assistant instructors in the SNAP.

During the spring of 1997 our main student instructors were again Jennifer Hill and Minna Pasanen. Hall is currently a master’s degree candidate in administration at the University of Wisconsin-Milwaukee and Pasanen will be student teaching in the fall of 1997. In the spring of 1997, 12 physical education students worked as assistant instructors in the SNAP.

Minna Pasanen served as the children’s aquatic coordinator and was responsible for four aquatic instructors during the fall of 1997. Our main instructors during this period were Kelly Allen, David Lewcock and Jennifer Short. After this semester Pasanen moved to Australia and was employed as an adventure education specialist. Other physical education majors who worked as instructors were Chad Nass, who was later hired at Port Edwards, and Beth Vander Sanden. Our first early childhood aquatics program with SPASH was implemented with seven PEX 315 students and 16 EC students. In the fall of 1997, 10 physical education students worked as assistant instructors in the SNAP. Three out of 10 PEX 301 students were certified as Adapted Aquatic Teaching Assistants.

During the spring of 1998 our main instructors for SNAP were David Lewcock, Jennifer Short and Kelly Allen. During the spring semester 12 physical education majors served as teaching assistants. Six out of 12 PEX 301 students were certified as Adapted Aquatic Teaching Assistants. During the summer of 1998, Short was hired as the waterfront and aquatics director at the Lions Camp in Rosholt and David Lewcock served as the children’s coordinator and main instructor for the Summer SNAP.