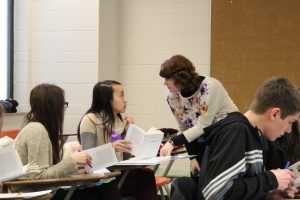 Designed as a traditional study of French, our major provides students with a balanced knowledge of French language, literature, and civilization.

To enhance their education and increase their chances for future employment, many students pursue double majors. There virtually is no limit on subjects you can combine with French: another foreign language, history, political science, a business degree, and international studies. If you combine two subjects within the College of Letters and Science (COLS) for a double major, such as French and History, the total number of hours required for graduation will be the same as for a single major (120 hours minimum). A double major normally will not prolong studies beyond the customary four years. If you combine a major in French with a major in another college, for example, French with Wildlife Ecology in the College of Natural Resources, or French and Music, which is in the College of Fine Arts, the number of hours required for graduation is also 120 hours. Although there will be some overlap between both degrees, you have to fulfill both sets of degree requirements. This double degree program is likely to prolong your studies by a semester or even a year. Consult with your advisors for more details.